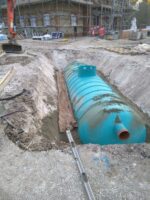 Where a domestic, or indeed commercial, property has a private borehole, a storage tank may be required for the water. If this has been tested and approved as potable water then it should only need a suitable tank with filtration and pumping system. An underground tank is ideal for this, as it is unobtrusive and keeps the water at an even temperature.

There are certain regulations relating to private water supplies: The Private Water Supplies Regulations 2009 , but it is advisable to check with your local Planning Department and the Environment Agency in any case if you intend to install an underground water storage tank.

Another possibility might be the need for a storage tank because of the connection to the mains supply being at a lower level (e.g. down a hillside). This is where a pump station would be required but a storage tank can also be used.

Camp sites or holiday homes in more remote locations might need underground water storage tanks as well – they obviously don’t take up as much ground space as an above ground tank. 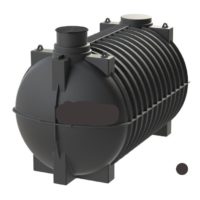 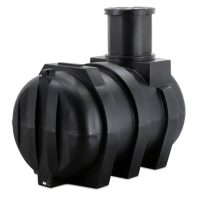 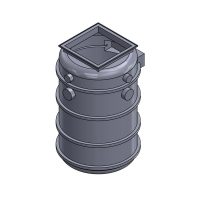 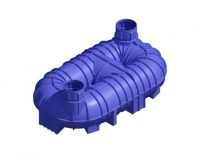 Tanks-UK supply a range of different tanks which can be used underground for potable water, from 800 litre right up to 10000 litre capacity as plastic tanks, and even larger GRP ones from the SPEL range. 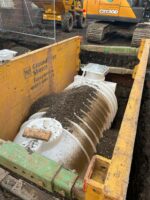 This is one area where underground tanks come into their own as out-of-sight rainwater harvest tanks.  Whether the water is used domestically for flushing toilets, for agricultural irrigation systems, commercially for watering nurseries or for industrial uses, underground tanks are low profile and once the ground is reinstated all you can see is the inspection cover.

Fire sprinkler systems are another area where an underground feed tank with pumping system might be applicable. Where they are not directly means fed, they will probably need quite large feed tanks for a sprinkler system to work efficiently – very much dependent on size of system.

One new adaptation which is very useful for underground tanks, is a telescopic neck, which means you don’t need several extension turrets.

How are the tanks adapted for underground use?

As you can imagine, underground tanks are subject to a great deal of ground pressure and changes in the weather can cause the ground to shift, so they do have to be specially manufactured to resist this. They are generally reinforced with extra ribbing around the tanks, built in when they are moulded. This is similar for either the plastic or the GRP tanks.

Depending on circumstances and the soil type they may be installed on a concrete base or a gravel bed and then backfilled with suitable material (planings, crushed concrete, gravel or poured concrete) to prevent movement. One thing to note is that underground tanks are designed to sit relatively shallow below the ground surface and this area is suitable for foot traffic only, the exception being if it is set entirely in concrete and has been checked by a structural engineer.

Where they need a CAT5 Air gap (see previous blog here for an explanation) then they will have a raised turret which protrudes above the ground with a weir and overflow.

As well as the telescopic neck already mentioned, further adaptations for underground water tanks include various pump solutions, pipework and gauges. They can have twin necks with inspection covers or extended turrets (custom made if necessary – see our case study here). A turret extension is now available as a separate accessory.