Tanks-UK supply the Enduramaxx range of tanks, which are rotationally moulded from UV stabilised PE (or other plastic in some cases for increased chemical resistance) in different colours and configurations. They are constructed in one piece with no seams which could split and should therefore give the customer many years of service. 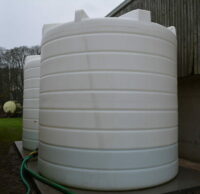 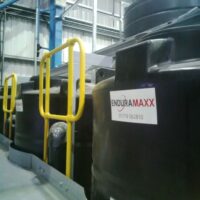 This type of tank is probably one of the most popular of all, especially for larger capacities of liquid. They can be supplied with various types of fittings and pipework to suit individual applications, including pumps, taps, hoses and nozzles for dispensing, etc. They only require a flat, level solid base, such as a concrete pad and once positioned will last for years in normal use.

Some of the uses for vertical tanks would be rainwater harvesting, potable (i.e. drinking water) or non-potable water storage, fertiliser or liquid feed storage on farms, and above-ground effluent storage – which does require specific fittings. The tanks for chemical storage are made with thicker walls to accept liquids with a specific gravity of up to 2SG.

For water storage where there is a mains feed, you will probably require a Category 5 AB fitting. This is an air break between the inlet and the outlet which ensures no backflow of water from the tank back into the mains pipework.

Enduramaxx’s horizontal tanks are ideally designed to fit onto flatbed trucks and trailers for transportation. They are constructed with tank ‘legs’ which can be pin mounted to a load bed, and this is more stable than strapping. The larger tanks are often used to create tanker trailers for agricultural or industrial use. Horizontal transport tanks can be supplied ready mounted onto a skid plate, with or without a pump plate, for the customer to use with their own vehicles or trailers. The transport tanks have moulded-in baffles internally.

What are baffled tanks and why? For anyone transporting free-flowing liquids such as water, there can be a problem with movement of the liquid causing a serious shift in the centre of gravity of a vehicle, for instance when cornering or going round roundabouts. In the worst case scenario, this could lead to a vehicle overturning. Adding baffles to the tank reduces this ‘sloshing’ movement considerably, simply by reducing the area where the liquid could move. Baffled tanks have built-in indents to effectively manage this risk.

This is a speciality of Enduramaxx and they are very versatile in industrial or agricultural storage, processing and dispensing applications, being available in a huge range of sizes and configurations. The advantage of having a cone bottom to a tank means that it can fully drain, which is not generally the case with a flat bottomed tank, unless you use a pump. Obviously these can’t sit flat on the ground, so they would normally be supplied with a purpose designed frame and legs; or they might have a frame pre-constructed on site.

Cone tanks are often seen used as feed or fertiliser silos on farms. Apple growers may use them in cider brewing, and they are also used in winemaking and beer brewing.

Industrially they could be used as feed tanks – for liquid or powder, and also for settlement tanks, as the settlement can be drawn off at the bottom. 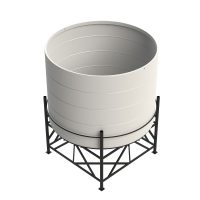 What are the uses for open top tanks? Well, this is pretty much only bounded by your imagination. Some people even keep fish in them! Seriously, they are used in aquaculture for fish holding or quarantine tanks. The concept of an open top tank lends itself very well to the addition of mixing equipment mounted on top, for instance, so they are often used in production areas for mixing liquids or powders.

Enduramaxx open top tanks are available either as cone tanks, or as flat based vertical circular tanks.