When you think of effluent treatment you probably think of sewage treatment plants.  But this is not the only type of effluent which requires treatment before it is allowed to be discharged. Industrial process liquid waste is also effluent requiring treatment. As discussed in an earlier blog post, the word ‘effluent’ means waste outflow, generally regarded as liquid waste.

New Regulations came out in 2015 and there are what is known as ‘General Binding Rules’ which set out what can and cannot be installed in relation to the environmental discharge. In general, septic tanks as new installations are no longer acceptable, and the larger treatment plants will still need environmental permits, but smaller domestic ones probably won’t need a permit.

Hydroclear sewage treatment plants are underground tanks with separate sections through which the waste passes for treatment. Firstly it flows into the primary chamber of the treatment plant, where solid matter settles at the bottom, called the primary settlement zone. The aerobic process causes this to biodegrade. The effluent then flows into the reactor zone, where a bubble air diffuser keeps it moving freely. As the effluent passes over the media, it is purified by micro-organisms growing on the surface. After this process is complete, treated effluent flows into the final settlement zone where any remaining solids settle to the bottom. The final treated effluent is then pure enough to discharge to a soakaway or even direct to a nearby watercourse. 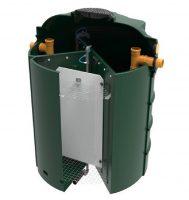 The CAP range are more compact and cheaper to purchase. They work in much the same way, albeit in a different design, with vertically segregated rather than horizontal sections. They meet the regulatory standards for treated effluent discharge to ground or watercourses – but are slightly less efficient than the HC range.

Flocculation tanks – what are they?

This is a system used in some industrial effluent treatment. Essentially the tanks are constructed so that solids separate from the liquid solution in ‘flocs’ or clumps which can be easily removed, leaving a purer, cleaner liquid behind. Sometimes flocculent chemicals are added to the basic effluent in order to achieve this.

The Enduramaxx range of industrial tanks, including the dosing tanks, can be used as flocculation tanks for effluent treatment.

Settlement tanks are similar but in this case, the solids separate from the solution and settle at the bottom to be drawn off. Cone tanks are very well suited for this purpose.

Because all effluent treatment systems are effectively bespoke, due to differences in applications, locations and terrain, it is always best to call us before ordering, to discuss the details of your requirements.